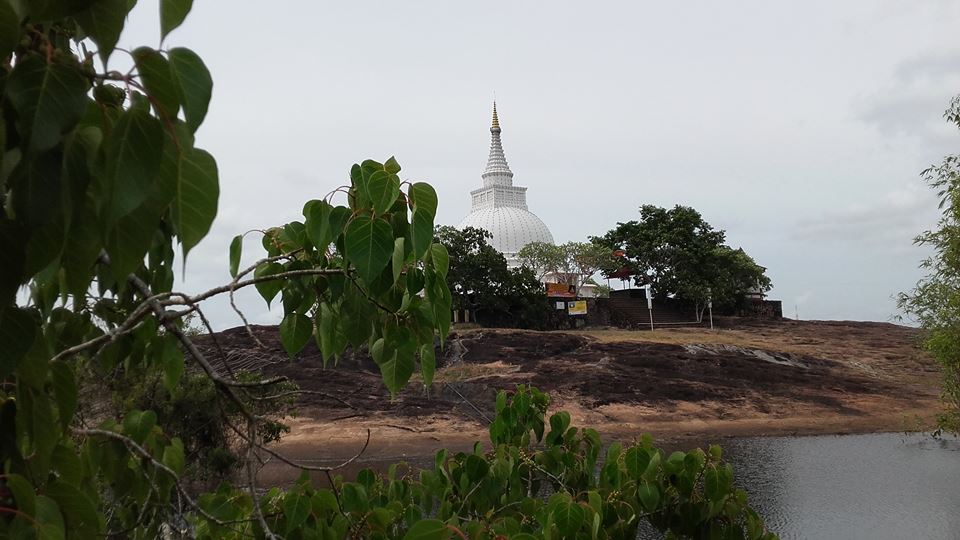 This forest area is well-known and not accessible to Thantirimale except through the great forest. Because of the fact that there are no ordinary people on this path, once again, the footpath once again will be faded again. In this manner, the elephant’s fragment, the footprints of the bears, and the presence of the LTTE, Welith, seem to play with a danger.

We quoted this in the book written by a writer in the early 1960s in Tantirimale. Writer Walter Senadheera. The name of the book is still a ruined ruin. Tantirimale is still a ruined ruin of that time, but nowadays it is a carpeted highway and modern facilities. But its ancient history remains imperfect. From Anuradhapura to Mahavilachchiya Road 36. Mahawilachchiya road Turn left at Halembewa junction and reach another 3km from Wimalagnanaya Mawatha. Must travel 18.

You may have wondered why these villages are strange. They were settled and settled in the village by people of the temple, Ven. Kongangaskada Wimalagnana Thera. Each of these villages contributes to the Tantirimale Vihara. He was able to clear the Tantirimale which was only a Forest Archaeological Eve. He was the visionary of the Sri Lanka Broadcasting Corporation’s ‘Tripadamasa’ program.

I was the only man here in the world. An archeological worker who offered a twenty rupee allowance. This archaeological worker is very old. G. The Pelis. I grabbed hold of him and walked around everywhere and found the size of the tanks here. I will give the land in Tantirimale and come and settle. (Sinhala Vehera Temples – JB Dissanayake)

The villages of the Wimalagnanasara thera have passed through the past two to three generations. In the meantime, they had to take a big risk of surviving the tigers of the last tigers.
The Tantirimale Archaeological Survey is a land area of ​​121 acres. It is surrounded by forests and rocky rock caves.

Thanthirimale which was shining off the karst area until the 13th century was settled with the demise of the Rajarata. In the recent past, this sacred place was first recorded by S.S. By the Englishman Houston. Then HCP. Researchers such as Bell, Henry Parker, and John Stearl have come to Tantirimale in the middle of the town. John Stillel, with the results of this experiment, in 1910, Hokate has been a correspondent for the magazine of the Royal Asiatic Society’s Sri Lanka branch in 1929.

In 1909, John Wishel stayed in a cave for about a week, and explored the ruins of the forest.

From Tantirikale, from Prehistoric to the historical period, Tantirikale has a pleasant memorial. In this area there are 12 ruins of ancient buildings. Ven. Wimalantha Thero dedicated this historical moment to the present in the early 1960s. He repaired 81 destroyed tanks.

According to legends, Upatissa of the Upcountry Prince Upatissa came to Tantirimale.

Another is thought to be the Bamunugama of Tivak, who lived in the city during the second centuries. It is said that the place where the Sri Maha Bodhi was kept from Dambakola was kept there for a day. The inscriptions from that time-period clearly show that the area had been inhabited by Buddhists since the time this area was discovered in Buddhism. From the caves of Tantirimale, inscriptions belonging to the prehistoric period dating from the period of the bhikkhus, such as Nagha Udayasawa, Swamy Sumana and Pishapparthi Tissa Theran.

The second Sena (AD 853-887), also known as the Dynasty period, was also found. According to the letter, those who violate the fishery should be given annually for any institution and they should be spawned and born in the future.

Antiquities found from the temple were found at the Archaeological Museum of Tantirimale.

The beautiful scenery of lotus ponds and the stately Buddha statues on the rocks. A statue of Buddha on the rock of Tantirimale is an important statue of statues in Sri Lanka. This Buddha Statue is akin to the Buddha Statue of Wijeshanara on the Polonnaruwa Gal Vihara. Archaeologists say that these statues were reputed Mahayan Buddhists.

Prof. Indrakerthi Siriwarde says that the regime had spread in the eighth ninth centuries during the eighth and tenth centuries. (Sri Lankan History Threats, 249 Outputs)
The seated Buddha statue is 7 feet 6 inches tall. Stone has been dug into rock. Paintings to the statue. The devotees are left to the left with a right foot and placed on their right foot with a right foot. The statue of the dhamma is said to be Samadhi. C. This statue of the late 10th century is also located on either side of the stone at the side of the stone.

The Buddha statue which lay in Tantirimale is 45 feet in length. This statue is similar to the reclaimed Buddha statues that can be seen elsewhere in Sri Lanka, but it was not well completed. The statue is located near the ground level. In the early days it was evidence of a statue of idols. (Buddha Statue in Sri Lanka, Malinga Amarasinghe 116 out)

The Bodhigaya Tantirimale is a historically important monument. The first place in Bodhigaya was a Dagoba. Archaeological excavations have revealed that a B Bodhigara was erected on the Dagoba and planted Burak. Today Bo Bodhiya is a Bodhi Branch which is a Bodhi Branch.

Specially Buddhist monastic orders A number of ancient monuments are found in Arankelle, Ritigala, Manakanda and Rajagala in the area. It is clear from the temple on the rock of Tantirimale that this was a beautiful temple early.

Beyond the main rock, a few caves meet in the forest a short distance away. Their prehistoric coves are ruby. The first evidence of solar worship is preached by the historical paintings of Thanthirimale. Nandadeva has been mentioned. One of these is considered to be the sun. There are three clutter-free screens in the vicinity. Human beasts, human birds, birds, birds, and other objects are its symbols.

We mentioned above only a few places that should be brought to the mind of Tantirimale. There are many places you should look out for.

List of Countries Ceylon People Can Visit Without VISA